I am so excited to share this story. I’m so in love with these characters. From the hero and heroine to the villain to the secondary characters. I love the setting and thoroughly enjoyed researching the Downtown Eastside of Vancouver, infamous for being Canada’s poorest postal code. I miss Sophie and Caleb. I miss their sparring and their loving. I could have happily taken this couple and developed a series around them, pitting them against all kinds of adversaries. Ah well, I’ll have to settle for the next installment of the story, Christine and Zach. I wonder what kind of trouble will spill over and mess with a socialite and the private investigator who’s tasked with keeping her safe. Away from the slums of Vancouver to the troubles of the rich and richer.

But first – Off The Grid 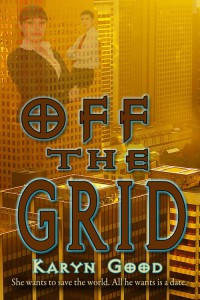 So there you have it! The cover has been revealed. The date has been set. Now I wait.