It’s been a little over a week since I attended the one day workshop  by Donald Maass. I find myself on the lookout for emotional stories. Stories told by persons deeply affected by the story they are telling.

Here are some notes I took:

Have you ever sat and listened to a story or someone’s recount of events and wish the story would go on indefinitely? When it is both a beautiful story and a well-written (or well-spoken) one and you just don’t want it to end?

I thought of all these things as I listened to CBC (Canadian Broadcasting Corporation) is morning and The Current’s Anna Maria Tremonti interview Gina Roitman who is, among other things, a writer and poet. She is also the co-producer and subject of the documentary, My Mother, The Nazi Midwife and Me.

My journey began as research for a novel, a work of fiction.  It quickly grew into a documentary,  when at almost every turn I uncovered accounts that are not only relevant to me as an individual, but to history.

My Mother, the Nazi Midwife and Me is a compelling, hour-long documentary that unearths a chilling story about the systematic murder of Jewish infants in a DP camp after the end of World War II.

My Mother, The Nazi Midwife And Me airs tonight at 8:00 pm on The Documentary Channel.

In the documentary Gina Roitman talks about the stories her mother, a Holocaust Survivor, told her surrounding her pregnancy and circumstances of the place in which she was to be born. She tells of her mother’s fears about newborn babies dying in the Displaced Persons Camp where they lived after the end of World War II. And on Gina’s birthdays she would tell her the story of how she saved her life.

It the fascinating story of a daughter who grew up in Canada having never experienced the horrors of being Jewish during the Second World War. It’s the story of a woman hearing her mother’s warnings and paranoid stories, discounting them, and how later in life she came to learn they were true.

But What is it that moves readers’ hearts? What conjures in readers’ imaginations a reality that, for a while, feels more real than their own lives? What glues readers to characters and makes those characters objects of identification: people with whom readers feel intimately involved, about whom they care, and whose outcomes matter greatly? Emotions. Donald Maass, Writing 21st Century Fiction

That’s what I felt while listening to The Current and Tremonti and Roitman discussing this documentary. It is a deeply personal story. There is a puzzle. The stories told to her by her mother make her exceptional. Those stories colored her relationship with her mother. She could not relate to them. Until she decides she needs to know the truth. And she turns her disadvantage into an advantage. At least, that’s how I’m looking at it. And why I’ll be watching The Documentary Channel tonight. 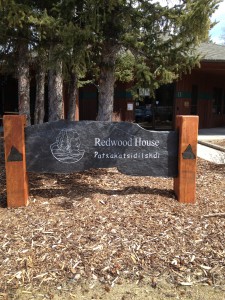 This last weekend I attended a Donald Maass workshop. To say I was excited about meeting him, but also learning about his writing philosophies, is putting it mildly. A one day workshop for which two other writers and I traveled from one province to another for a total of eight hours of driving each way. Also, the members of the Calgary Association of the Romance Writers of America (CaRWA) rock! They were friendly and open and picked the most beautiful spot to host a writing workshop. We spent the day at the foot of the Rocky Mountains with the sun shining and the scent of cedar in the air.

No doubt, the man is inspiring. My head is full of ideas and a new or reinforced way of looking at character.

But the drive there, the time spent discussing writing with three other writing buddies, was also full of awesomeness. If laughing takes years off your life, I definitely lengthened my lifespan. Note: It’s hard to drive when you’re laughing so hard you’re crying. OMGosh. Also, what are three writers unconcerned about while driving to a Donald Maass writing workshop? How much gas is in the gas tank. Sheesh. We coasted into a acreage just off the highway hoping for a miracle. Thank goodness for Everyday Heroes like Steve, who gave us his last litre of premium gas. He also offered to rescue us if that last bit of gas was not enough to get us to the next gas station.

A Tiny Look Into a Donald Maass Workshop

This workshop was based on Maass’s latest craft book, Writing 21st Century Fiction, High Impact Techniques For Exceptional Storytelling. In it he shares his thoughts on the future of fiction, genre fiction in particular which he suggests is dying. That the New York Times stats suggest newer genre transcending novels, such as The Help and Water For Elephants are enjoying far more than their share of weeks on the list. Genre fiction appears there but for far shorter amounts of time. One to four weeks versus 60 weeks or longer. The reason? There are a few of them but one of them is:

The Emotional Impact of Captivating Characters

We spent a fair bit of time learning about creating captivating characters. Okay, most of the day. Indeed, the very first thing we had to do was identify the feeling we were most afraid to put down on paper. The idea is to tap into deep emotion and create from there. Then we had to think of a spot to inject this feeling into our main character. Also  the concept of conflicting wants within a character.

He used the example of a college student writing final exams. You are reaching your goal, on the cusp of getting that degree you’ve struggled and worked hard for. Are you excited about all the study and work that has to go into writing these final tests? No. You’d rather be anywhere else then taking those final steps. Simplistic example, yes. But you get the idea.

There should be a war going on inside your character. What do they want most? What is the cost of getting it? If you’re familiar with Maass’s WTBN Workbook you’re familiar with his ideas on conflicting desires or feelings. On inner conflict. Tension of Every Page. In Writing 21st Century Fiction he spends a lot of time on: micro-tension.

My notes on writing emotionally:

The only way to do this is to write from a personal place. To take experiences of extreme emotion and apply them to our writing. Do not write safe. This way readers will not get what they expect but what is true and comes from a deeply personal and conflicted internal space. Write personally and make heart to heart connections. Answer the hard questions. Even if, or especially if, it casts a harsh light on the main character.

Don’t worry I’m not going to ask you to reveal your greatest fears but to simply say if you have a chance to attend a workshop by Donald Maass take it. However, feel free to share the names of books you’ve read lately that transcend genre? That move past the  literary typecasting of dull and depressing?

I’ll share mine: Before You Go To Sleep by SJ Watson.

It’s a strange thing, but when you are dreading something, and would give anything to slow down time, it has a disobliging habit of speeding up.  ~J.K. Rowling, Harry Potter and the Goblet of Fire

My darling boy is nineteen years old today. In my part of the world that’s a big deal because it means you can walk into a bar and legally order an alcoholic beverage. Sigh. He’s just finished his first year of university with plans to switch to technical college. Two days ago he started his first full-time summer job.

Thank goodness he stills lives at home and we have that reality to deal with or I might completely collapse into a whimpering, simpering puddle of where has the time gone. Okay, I’m going to do it anyways. Just not here.

Instead I’ll tell you how excited I am to be getting ready to attend a Donald Maass workshop given by the Calgary Association of the Romance Writers of America. I’ve got my copy of Writing 21st Century Fiction and my half-written manuscript, Obsession, ready to go.

The characters who resonate most widely today don’t merely reflect our times, they reflect ourselves. That’s true whether we’re talking about genre fare, historicals, satire, or serious literary stuff. Revealing human truths means transcending tropes, peering into the past with fresh eyes, unearthing all that is hidden, and moving beyond what is easy and comfortable to write what is hard and even painful to face.

Get out of the past. Get over trends. To write high-impact 21st century fiction, you must start by becoming highly personal. Find your voice, yes, but more than that, challenge yourself to be unafraid, independent, open, aware, and true to your own heart. You must become your most authentic self.   Donald Maass, Writing 21st Century Fiction

We’ll be making the 8 hour trip from Regina to Calgary Friday morning. Three of us are traveling together. That means talking writing all the way there and all the way back. Yay!  Then back in time for extended family birthday celebrations.

Here’s hoping you have weekend plans of your own?