A person can find inspiration everywhere, in the smallest or biggest of places. Or anywhere in between. One source of inspiration for me is live theater. I adore it. I live in a small city, with a population of 200,000(ish). The largest theater company here is the Globe Theatre, and its performances are done in-the-round, meaning the audience surrounds the stage. The latest production was called The Drowning Girls. 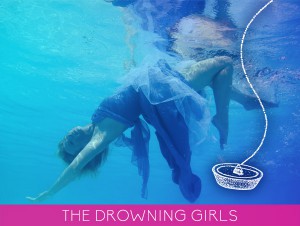 The Drowning Girls is inspired by a 19th century serial murder case where three women in succession where found dead in their respective bathtubs. Bessie Mundy, Alice Burnham, and Margaret Lofty were all married to George Joseph Smith who used many aliases to cover his tracks as a conman, bigamist, and murderer. The case became known as “The Brides in the Bath Murders”.

One of the things I loved about this play is its focus on the lives of these three women, on their histories instead of making it about the murderer. It gave us insight into how these women found themselves at the mercy of George Smith. It is the victims’ story. A cautionary tale of what can happen, be it the 19th century or the 21st. There was plenty of pathos, sincerity, and humour. Cleverly written and beautifully acted, with three bathtubs and water as the setting.

Yes, these three young actors spent a solid hour and a half dripping wet. There was water in those three bathtubs and the play opens with each of them submerged. Water fell from the ceiling, there was a moat of sorts surrounding the small stage. It splashed on the floor, on the actors, and maybe even the first row. Not only that but they don weddings dresses, veils, and silk stockings while soaked to the skin. The choregraphy of movement and body language was perfection. They were in and out of those tubs, danced on the slippery wet wooden floor, and they entranced the audience. 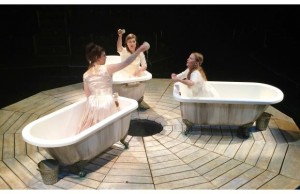 If it comes to an area near you, you should check it out! Do you enjoy live theater

4 thoughts on “Inspiration and Bathtubs”