It’s a steal of a deal for 99 cents until January 22nd! Set in the Downtown Eastside of Vancouver, British Columbia, Off The Grid is the story of two people snared in the net cast by one man in a quest for power and dominance.

I think this book weighs in higher on the suspense side. Bad things happen in this book. Just so you know. It’s honest, emotional, and fast paced. If you love gritty romantic suspense, this is the book for you! 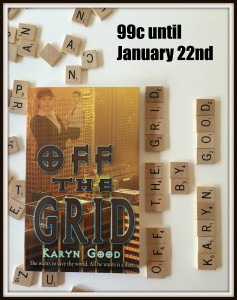 Off The Grid by Karyn Good 99c until January 22nd

A Bit About The Inspiration Behind Off The Grid

The first time I heard about the Downtown Eastside of Vancouver, famously dubbed Canada’s poorest postal code, I knew I wanted to set a story there. In a tough environment where I could explore the incredibly difficult choices some women are forced to make in order to survive. Not pretty ones, but real ones. I wanted a heroine who was compassionate, smart, and driven and a hero who was the product of privilege, ambition, and character. Two protagonists caught up in something bigger than themselves who must decide on which side of the line they are going to stand.

“These people, they aren’t invisible, and acknowledging that is worth something.” Eastside Stories

The video below is a powerful reminder that we’re all equal, that poverty isn’t catching, and that how we care for each other matters.