It’s Relase Day for my romantic suspense, OFF THE GRID! 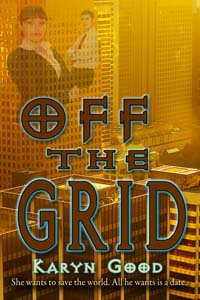 This story is set in the Downtown Eastside of Vancouver, British Columbia, infamously known as one of Canada’s poorest urban postal codes. A historical ‘skid road’ because of the city’s history in timber and logging. And known to sex trade workers as the Low Track. The area is plagued by urban decay associated with poverty, drug use, crime, and violence and has the horrific statistics to match its reputation. Hundreds of women associated with the DTES Low Track have gone missing since the 1980’S. Hundreds. Twenty-six of those women were murdered by convicted serial killer, Robert Pickton.

Fortunately, for the many people who call the Downtown Eastside their home, the DTES is also known for its community activism. As developers move in to gentrify the neighborhood and push them out, activists move to stop them.

She wants to save the world. All he wants is a date.

Casual relationships weren’t her thing. Once she’d yearned for more. For the commitment other women scoffed at. Then she’d learned her lesson. It didn’t mean she didn’t crave family. She refused to ask about the woman from his office. It was none of her business. Neither was he. But renewed determination to resist him didn’t mean he wasn’t getting to her.

No soft music played. The dim lighting was courtesy of an unlit dingy hallway. The smell of antiseptic and desperation laced the air. It didn’t matter. Sophie wanted to meet his challenge. She didn’t want to dodge. Or object. She wanted to kiss the hell out of Caleb Quinn.

So she stepped back. “I can’t do this with you. I need to know I matter. That I’m the only name on your list.”

Caleb took her face in his warm hands. “Sophie, right now there is no one else but you.”

She wrapped her hands around his wrists and tugged them away. “But there’s a long line behind me and I’m choosing not to join the queue.”

“Don’t.” He refused to let go of her hands when she tried to release them, brought them up between them. “Don’t toss this aside.”

“There won’t be anything casual about it.”

There you have it! I hope I’ve intrigued enough to purchase a copy of Off The Grid. Happy Reading!