One Word To Guide Me! 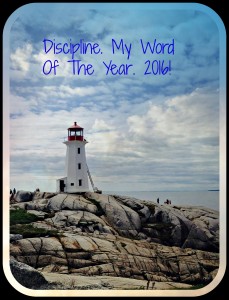 This is a photo of Peggy’s Point Lighthouse, Peggy’s Cove, Nova Scotia which we visited in the summer of 2014. It literally sits atop rock. As in granite. I have no idea how it hasn’t been washed away. One of the most recognizable lighthouses in the world, it’s now operated by the Canadian Coast Guard. The original lighthouse was built in 1868. The keeper lit a kerosene oil lamp at sundown every night shining a red beacon on the eastern entrance to St. Margaret’s Bay.

One Word To Keep Me On Track!

Discipline! I didn’t have to think very hard to come up with my word for 2016. Organization was my 2015 word and I actually felt I achieved some measure of success. Choosing discipline seemed a good way to compliment the work I’ve already been doing. Unlike last year’s word, this year’s choice of discipline is geared towards my writing life. As in setting aside specific times to write and guarding and enforcing it. Working at keeping the distractions to a minimum. And in the end, upping my production.

One Word To Bring It All Together!

That’s a lot pressure to place on a single word. But I find it easier to keep one word front and center, rather than a list of resolutions. Compounded by the fact I’ve never succeeded at keeping one past New Year’s resolution. Ever. And it gives me leeway to set monthly goals and revise ones that aren’t working.

And In The Darkness…Wait! What?

Never mind that. Hopefully at the end of 2016 I’ll have finished one book and written another. All with the help of one ten letter word.

Do you pick a word of the year? One that describes what you want to achieve in the upcoming year?